Digital infrastructure for the analysis of national movements in Europe

National movements in Europe since the 18th century have played a transformative role in the history of modern Europe, and has inspired research for many decades. Unfortunately, much of that research stays secluded within geographic boundaries. Language and disciplinary barriers often deters a systematic empirical comparison between movements, and have obstructed a deeper understanding of how, why and when emancipatory demands emerge.

As a result, our knowledge of the emergence of national and regional movements in Europe and the differences, similarities and connections between movements is very fragmented. This is regrettable because nationalism and national movements did and do not stay isolated within regions, nations or states. Nationalists move(d) across borders, and their cultural and intellectual production and legacy spread(s) all over Europe.

With DIANE, the international platform NISE wants to provide a digital instrument that facilitates and promotes the comparative and transnational study of national and regional movements in Europe. DIANE is a digital work environment and online toolkit in which students and scholars can effectively collaboratively collect, connect, analyse and share data.

Want to have a look in DIANE? Log-in here with log-in diane@nise.eu and password guest and explore the different categories and tools.

DIANE is set up as a flexible database that can host a range of research projects. Researchers can start a project and make use of the basic architecture with the categories Persons, Associations, Events and Places and descriptors (such as name, gender, nationality etc.), which they can tailor to their specific research questions. Or they can create new categories, such as Referendums. They are able to invite other researchers to work or see their database, and manage access to the material. DIANE is also a relational database, designed to connect the entered information. A political event, for example, can be linked to the persons who attended the event, the iconic building it took place in and to the associations that organized it. 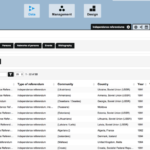 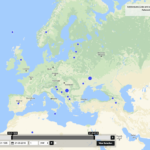 The environment is provided by Nodegoat and is especially catered to the needs of historians and social scientists. Its digital toolkit include geographical visualisations on maps with timelines, social network graphs and chronological visualisations – all with one click on a button.